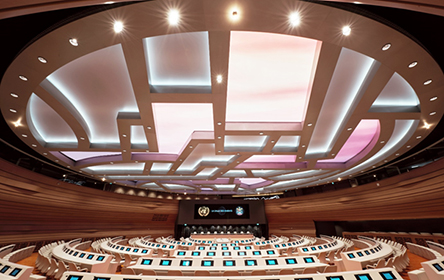 For the accomplishment of the ceiling, BGL was in charge of the installation and integration of the audiovisual technology that enables the recreation of the view of the Emirate sky at six different stages of the day.

This June the Emirates Hall, previously XVII hall, was unveiled at the Palace of Nations in Geneva. The renovation and modernisation had a cost of 22 million dollars, which was financed entirely by United Arab Emirates Permanent Mission at the headquarters of the UN in Geneva.

The opening was led by the Ambassador of the United Arab Emirates and Other International Organisations, H.E Obaid Salem Saeed Al Zaabi, and the Director-General of the United Nations Office in Geneva, Michael Møller. The concept of the new Hall revolves around three essential elements in the everyday life of the Emirati people: the sky, the desert and their traditional clothing, always white, composed of the kandura-dishdasha and the ghutra to cover the head.

Elements, which in the Hall are symbolised on the ceiling, where you can see the sky; the carpet on the floor in various tones of the reddish sands of the desert; and in the comfortable white armchairs, the image of a traditional Emirate. As well as other motifs, which evoke local interests, such as horses and falconry.

The Italian company CCM, specialised in interior furnishings for airports and large public spaces was the main contractor who carried out the entire renovation. For the accomplishment of the ceiling CMM relied on BGL, the audiovisual technology company.

The most moving part of the inauguration ceremony occurred when the Head of the Emirates project asked the BGL engineers, who travelled to attend the event, to kickstart the audiovisual demonstration which allowed the attendees to observe the Emirate sky and the clouds passing over them for several minutes.