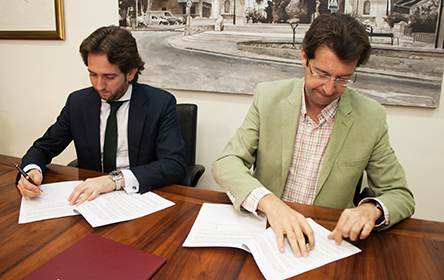 The new 7RM begins tomorrow with its transitional broadcasts, very close to the local culture, customs and needs, providing daily transitional news briefs, documentaries and rebroadcasts of some of the festivities celebrated in the region this upcoming Easter

This morning, Juan Carlos Ruiz, regional Minister of Industry, Tourism, Enterprise and Innovation of the Murcia Region and Raul Berdones President of the Secuoya Group, have signed the contract for indirect management of Murcia Television on behalf of the audiovisual company. This will come into full effect tomorrow, Wednesday, the 1st of April;
the new 7RM will begin their broadcasts fulfilling the commitment ratified by Secuoya.

Alejandro Samanes, general director of 7RM, who has an outstanding repertoire in the world of audio-visuals, will lead the network’s management team. CEO, general director and founder of 13TV, Samanes launched the KW Entertainment channel in Federal District, Mexico. He was managing director for Popular TV (Cope Group) and sole administrator of Valtierra Productions. In addition, he was awarded the Talent Prize from the Spanish Academy of Television Arts and Sciences for his professional career.
Joining him on the team is Antonio Peñarrubia, news director for 7RM. He received his degree in journalism at the Catholic University San Antonio de Murcia and an Executive MBA at Nebrija University. He was in charge of the news for 7RM between 2008 and 2012 where he presented various newscasts. In the last few years he has served as an advisor for the Government of Madrid in the Presidency as well as in the Social Affaires Department.

Starting tomorrow, 32 Murcian professionals begin working in addition to the almost 80 workers that Secuoya will directly employ for Independent Television of the Murcia Region, this figure is expected to progressively increase in the following days to come until the permanent staff is complete.

In this new endeavour, 7RM will schedule daily newscasts, which will greatly differ from what is regularly broadcasted: to this day, Murcian television only included news broadcasts on school days, but from now on the citizens of Murcia can be informed through their independent network Monday through Sunday. Until the schedule is consolidated, the regional network will broadcast transitional newscasts including on weekends, but as the weeks progress, the definitive news programs will take shape. Furthermore, during Easter week, the new 7RM wants to be very close to the Murcian citizens and that is why they have designed a series of special features built on Murcian culture, customs and the identity.
During the upcoming festivities, the network will broadcast on Holy Thursday a documentary on one of the main brotherhoods of Murcia, “Los Coloraos”. Also scheduled is a broadcast of the Salzillos procession, one of the most ancient and significant passionate institutions of the city, which will march on Good Friday in the morning.
On Easter Tuesday, 7RM will live broadcast the activities of the Bando de la Huerta, the main day of “Springtime Festivities” in the city of Murcia, a day of celebrating farming traditions, which are closely linked to the history of the city. Citizens not participating in the march can enjoy it from their homes thanks to their regional channel.
Indeed, it is a transitional schedule weighed by the circumstances of its execution, which is why the network has spared no expense to ensure that Murcian viewers can receive information, culture and quality at home. Throughout the next weeks, The Secuoya Group will finish defining the permanent schedule of Murcia’s regional television channel, with different programs from other local stations being progressively incorporated in addition to the new professionals who will finalize the complete schedule.
In the near future, 7RM will hold a Presentational Gala for content where the entire schedule will be revealed.