Enminúscula launches a webseries for Moulinex 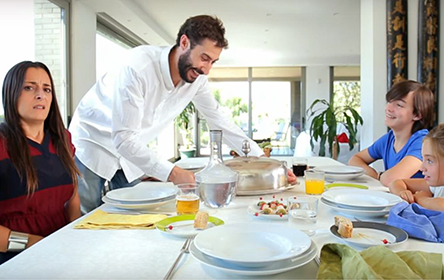 Jordi Cruz, the star of six episodes that demonstrate the characteristics of the brand´s new food robot

Moulinex, in collaboration with Mindshare and Grupo Secuoya, has launched a digital webseries to promote the most innovative multifunction kitchen robot, the Cuisine Companion. From the kitchen to the set and the spotlight, Jordi Cruz, with two Stars under his belt and the youngest person to be officially awarded by the Michelin Guide, has made his debut in the fiction world, thanks to Mindhsare and Grupo Secuoya, and the group´s producer, Enminúscula.

The Branded Content action plan aims to impact the end user directly and create brand engagement and involvement, particularly among lovers of healthy cooking.
Mindshare and Grupo Secuoya have produced this webseries exclusively for the launch. It consists of 6 episodes starring an unconventional family, the Cuesta-Collado (Cu-Co), composed by Monica Cuesta, multitasking mother, but not a great housewife; Antonio Collado, devoted father who likes to have his nose in everything; Javi, teenage son who is almost emancipated and sometimes cooks to impress his friends; and the grandfather, who became a vegetarian after a trip to Tibet. Absurd situations arise in each of the episodes and on more than one occasion, the Cuisine Companion robot solves multiple problems, with the occasional special collaboration of Jordi Cruz.

The series was launched on October the 26th and will be shown until November 30th on the main digital portals for Club Cocina Moulinex: YouTube, Glamour, Canal Cocina and MundoRecetas. The formats used in the campaign are microsites and advertorials that redirect you to the Moulinex community´s website: www.clubcocinamoulinex.es where you can view all the episodes, as well as the product´s data sheet. Apart from all these sites, Moulinex will provide support on a weekly basis via social networks, along with hasthtags adhoc. Every week, until the 6th of December, a new episode will be released. The aim is to generate enough interest to emotionally engage the potential buyers and provide them with sufficient reasons to purchase the product in the most important selling period for Moulinex, the Christmas sales.