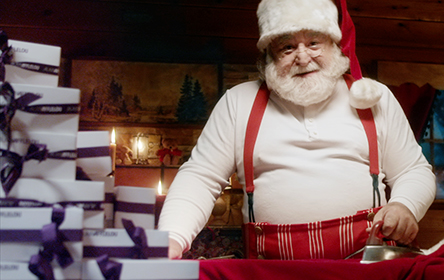 Enminuscula, Grupo Secuoya´s producer that specialises in publicity formats is responsible for the production and implementation of the Christmas campaign for Alain Afflelou: “Tchin Tchin Especial Fiestas”, consisting of two 20” advertisements for TV. The first one, which has been on air since the 20th of November, just days before the Christmas campaign kicked off, shows Father Christmas doing some household activities at his home in Lapland, bringing to light his homely side in the company of a new star – Rudolph, the dog-reindeer interpreted by Buzz, a British bulldog to be seen on TV for the first time with this ad. The other advertisement “Afflelou – La llamada inesperada” will surprise us with a story full of tenderness, making the Christmas spirit last until the 31st of December.

The agency TACTICS Europe are behind this creative campaign with their team formed by Veronica Segui, Oscar Mozun (accounts), Tony Fernandez-Manes, Fernando Camino and Raul Pavon (creation). It was filmed in Torrelodones and produced by the producer Enminuscula with Lydia Pallares (producer), Sergio Zuniga (director), Valentin Alvarez (director of photography) and Cesar Romero (production). Peakland were in charge of the sound and the studio Doce Gatos was in charge of the post-production.