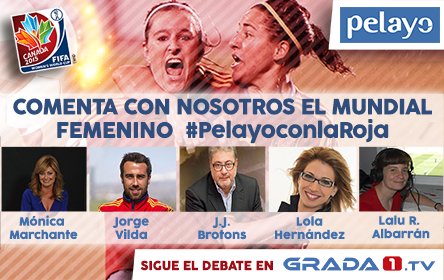 The championship, which started on Saturday, will feature a debate re-broadcasted exclusively by Grada 1, where the main goal will be to make it viral on the social media

Grada 1 (the Secouya Group) continues supporting emerging sports by the hand of an action in which they will collaborate with the Women’s World Cup, and their official sponsor, Pelayo, with the purpose of capitalising the event on the social media.

For this, Grada 1’s platform will show a debate before the Spanish football team’s matches (9th, 13th and 17th of June) with streaming connections 30 minutes before and after the match, and during the fifteen minutes of half time.

Tomorrow, Tuesday, with live connections at 9:30 pm, 10:45 pm and 11:45 pm Grada 1 will host a debate that will include journalists, Monica Marchante and Lola Hernández, the U19 women’s national coach, Jorge Vidal and Lalu R. Albarrán, creator of www.futfem.com. Jose Joaquin Brotóns will be responsible for presenting the programme.