MIP TV: Grupo Secuoya and its format “The Shower” are selected for Fresh-TV 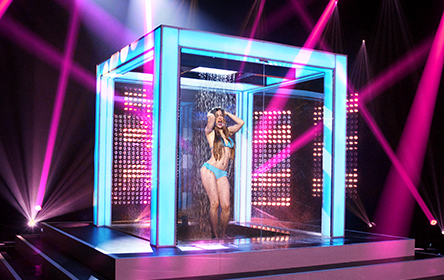 This greatly entertaining format by Grupo Secuoya has raised much interest in countries such as France, China and Italy.

Secuoya Content Distribution attended the 51st MIP TV forum (7-10 April) with a clear goal set for their new title “The Shower”, which has managed to ease its way into Fresh TV’s selection, and quite rightly so, seen as the Cannes Forum pays a tribute to the freshest and most innovative formats in the world with this renowned selection.
The title of this new format is “The Shower”, and it will be a complete turnaround of the more traditional programs of this genre, thanks to its unique staging in which the less fortunate contestants end up under the shower. The contestants participating in “The Shower” have to sing a song while standing under a shower placed in the middle of the stage, as if having a shower in the privacy of their own homes. “We believe that talent shows as a format offer many possibilities and still has a long life ahead of it on TV. All we needed was a refreshing twist, and that is what we have given this talent show, by just adding water of course,” says Sergio Lizarraga, the R+D Manager at Grupo Secuoya. It does not come as a surprise that this new show has raised a lot of interest in countries such as France, China and Italy.
Secuoya Content Distribution offers highly successful shows from last season, such as “Vive Cantando”, a musical show that has become a benchmark in terms of production and a hit with viewers in Spain, and other shows such as “Maldito Chef” and “Una Miss para la Moncloa”. Among other new titles of documentaries, Secuoya presents “Carme la capitana”, “Viaje al Pasado”, and “Ainu, Caminos de la memoria”, which make up a catalogue of over 400 titles and approximately 3000 hours of ready-to-use footage.
In addition to working on the distribution of the group’s audiovisual catalogue, Secuoya made the most of its presence at MIPTV in order to strengthen its international position and continue building alliances for its international network of contents production.

If you wish to see the promo of “The Shower”, please click on the link below: