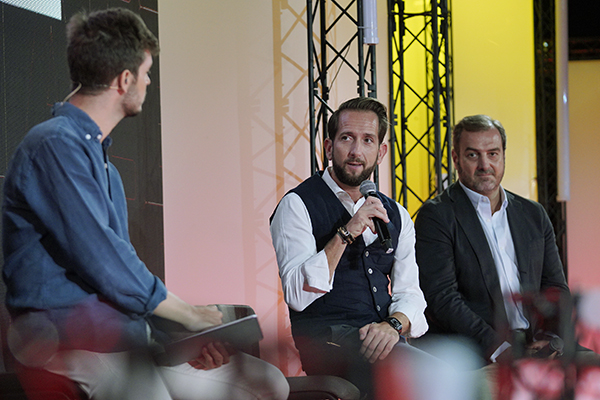 "Covid has accelerated the consolidation of the viewer towards the platforms"

Raúl Berdonés, president of Grupo Secuoya has participated today in the FORUM, the meeting point organized by TRIVU that during these days is bringing together people, companies and key entities of our country to lay the foundations of the new society and the Spanish economy.

The event, which took place in the auditorium La Nave de Boetticher (Madrid), included the participation of Raúl Berdonés in a round table to discuss the role of the media in the design and execution of the new strategic roadmap for transformation.

Under the title “The role of communication in the transformation of global and Spanish society” and with the presence of Luis Enríquez, CEO of Grupo Vocento , Manuel del Campo Castillo, CEO of Axel Springer _ Business Insider and Ángel Sáenz de Cenzano, CEO of LinkedIn in Spain and Portugal; Raúl Berdonés, analyzed how the audiovisual sector of which Secuoya is a reference, has a key role in the changes of paradigm and development of the country.

“The pandemic has accelerated a process that has been going on for some time now: the consolidation of the spectator towards the OTTs platforms. This crisis,” explained Raúl Berdonés, “has opened the age arc in the consumption of content platforms. This has helped the consolidation of the platforms and the growth of the market and even changed the profile of the free-to-air televisions, which have had to focus their efforts on communication of proximity. This pandemic has put, everyone in their place, in this sector.” Berdonés also explained that the great demand for content that we Spaniards have had during the lockdown has come to stay. “We are going to have a greater supply of content, nobody was prepared for this huge demand, everybody has put their hands on it. The industry is going to take us to a consolidation, the offer has opened a lot and that is positive…now we have to see if there is a market for everyone,” explains Raúl Berdonés.

Regarding the role that Spanish-language fiction and the Spanish audiovisual industry will have, Berdonés explained that “We are already one of the world’s great producers. Madrid Content City is one more piece to close the loop in order to consolidate. We have grown to limits that have led us to multiply by four the production of fiction in Spain. Our country is a catalyst and a pole of attraction for talent”.

During the round table, the CEO of Vocento added that “I don’t think that information consumption habits have changed with the COVID crisis, but that solutions have been accelerated, scenarios that were already planned,” explained Enríquez.  Very critical about the dependence on the media, Manuel del Campo took advantage of his speech to state that ” this crisis has questioned in a more convincing way the sustainability of the business model that is excessively dependent on advertising, its excessive weakness. It has accelerated a trend that has been seen for some time. On the positive side, the implementation of payment models has accelerated, which is the best way to give value to information,” concluded the CEO of Axel Springer. “In addition, the service to citizens provided by the media has been confirmed and it has been demonstrated that we are essential to society and even more so in times of crisis,” he continued.

For Angel Saenz de Cenzano, the remote work to which we have been forced in the past few months will allow “access to talent”. The Country Manager of LinkedIn Spain and Portugal explained “that we not only have Spanish executives who are climbing in large corporations, but we also have three Spaniards leading large American companies. Spanish talent” can achieve whatever they propose,” he concluded.