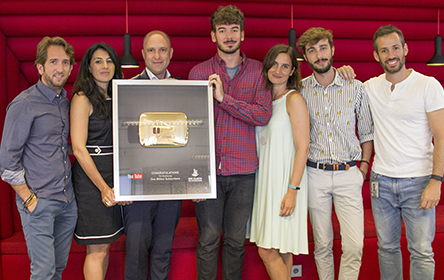 This morning, YouTube honoured Grupo Secuoya with the Gold Play Button for having surpassed the one million subscribers mark in their informative channel New Atlantis Full Documentaries.

The recognition took place at an event in which María Concepción Ferreras, Director of Partnerships in Southern Europe and Turkey at YouTube awarded the prize to Raúl Berdonés, President of Grupo Secuoya.

On an international level, the figures of Grupo Secuoya mark an important milestone, inasmuch that in the field of documentaries only National Geographic has more subscribers than New Atlantis Full Documentaries. The digitalisation of their content has breathed new life into the company and created a profitable business model for New Atlantis, opening up doors to a product of great quality, generating new income through the production of content.

Surpassing a million subscribers not only converts Grupo Secuoya into a paradigm within the professional creators at YouTube, it also endorses its figure as Content Manager of YouTube for third parties. Through its company Viewin, it assists the television networks and producers to enter into this channel with all of the guarantees and experience of a group that has been distinguished by the company as a strategic partner.

It was precisely the creation and the management of the New Atlantis channel that led to the creation of Viewin as MCN. The partners can now take advantage of the experience developed over those years as they see that having their content on YouTube is a safe and profitable business. Viewin bases its business model on the content management of professional producers on YouTube working with television companies and large media groups, from Atresmedia and Movistar+, to Prisa. Viewin helps to protect their rights in the worldwide video network and to maximise their content. The firm has international presence and now manages channels in Chile, Peru and Colombia thanks to the support of the local partners of Secuoya in these countries.